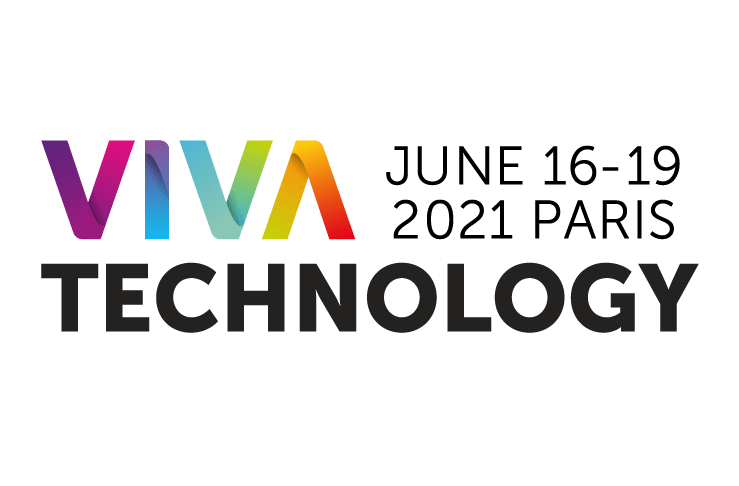 Paris, 13 April 2021 - VivaTech, Europe's biggest startup and tech event, is back 16-19 June in a new hybrid format, at Paris Porte de Versailles and online, for four days of reconnection and revival through innovation.

This year, VivaTech seeks more than ever to continue playing its role as a global catalyst for digital transformation and startup growth. The 2021 edition will be a strong marker of recovery at the European level: it will facilitate meetings and collaborations between innovation and technology players, to accelerate their transformation and offer growth opportunities to startups for a responsible and inclusive society.

For Julie Ranty, VivaTech's CEO: "The co-presidents - Maurice Lévy, Pierre Louette, and myself - want to make VivaTech 2021 a strong marker of economic recovery at the European level.  More than ever, innovation and tech are playing a decisive role in rebuilding our economies and creating a more sustainable society. We are convinced that these meetings and interactions will create new business and growth opportunities for large companies and startups. Many of our partners have already renewed their trust in us and our teams are continuing their incredible work to make this edition a success."

A new generation of events to reach larger audiences, in complete safety

This year, VivaTech is developing an engaging digital universe, combining a new concept of conference channels inspired by the codes of television and social networks; a networking platform powered by data-matching as well as spontaneous exchanges (networking rooms and a random meeting module with text and video chat); and an immersive showcase of the latest innovations (+500 innovations modeled in 3D/AR and immersive showrooms).

2- The power of gathering together in-person

At the same time, Europe's biggest startup and tech event remains convinced of the power of physical gatherings and the kind of human connection that comes only from face-to-face meetings. Starting 16 June and over four days, VivaTech is returning with a 25,000 sq-metre space in Paris at the Porte de Versailles. Enhanced by its new hybrid format, VivaTech will welcome more than 500 exhibitors, in strict compliance with health measures (attendance gauge, wearing of masks...).

3- Multiplexes on three continents, for programming around the world

In 2021 VivaTech is also strengthening its international presence by organizing and broadcasting three multiplexes in major global tech hubs – Southeast Asia,  North America, and Africa – with local guests and content to build bridges between Europe and these global tech ecosystems.

Another new feature: VivaTech is producing or co-producing content in new formats throughout the year, such as the VivaTech Tour, a weekly 100%-online magazine that explores tech ecosystems around the world and promotes collaboration among global players. Other formats include a recurring Ask Me Anything with VivaTech keynote speakers, in collaboration with Reddit, and the co-production of a web series on impactful innovations, with Brut.

Many major French and international partners have already confirmed their support for the new format.

The same is true for the territories coming to share the wealth of their ecosystem and boost their development:

– Around ten regions of France will be present at VivaTech, with eight of them already confirmed. Our major partners Ile de France Region, Occitania and Région Sud will be joined by Région Grand Est, Normandy, Nouvelle Aquitaine, Pays de la Loire, and the Overseas France network, and we are also counting on the participation of La French Tech, MGP and Business France.


1 - Technology at the service of the planet

Is unlimited and free energy possible? Can tech help us produce and consume responsibly? What will the cities of the future look like? How will we feed ourselves and move around in 50 years? VivaTech will present a series of programs to address the environmental challenges of the 21st century.

This year VivaTech will launch the FAMAE contest, showcasing sustainable innovations in six areas - food, waste, water, real estate, energy, mobility – and we will see some great innovations from startups and research laboratories such as Solar Stratos, the first two-seater commercial solar airplane; FARM3, a leading ultroponic technology and device company which develops high-yield vertical farms for the production of more environmentally friendly fruits and vegetables; and Wind My Roof, a roof-mounted wind turbine to generate your own electricity.

Lastly, VivaTech is committed to offsetting 100% of its carbon emissions and is launching the VivaTech Pact, a multi-partner CSR commitment charter that aims to coordinate the impact-reducing actions of VivaTech suppliers, partners and visitors.


2 - Technology at the service of society

In association with UNESCO, VivaTech is using its expertise in open innovation and collaboration with startups to provide concrete solutions to some of the major challenges UNESCO has identified: using AI to conserve biodiversity and preserve the planet; fighting discrimination and reducing gender bias in AI; and providing access to information in low-resource languages by breaking down the language barrier through data and AI.

Let's also note two initiatives to promote the place of women in tech:

Finally, because young people are particularly affected by the health and economic crisis, VivaTech is developing with Openclassrooms a free training program for 1,000 young people excluded from digital access and employment. The program will be presented in-person on Saturday as well as online.

A trailblazer for emerging trends, VivaTech will present the latest advances in health alongside the latest innovations in genetics and biotechnology. A deep dive into the quantum universe and cybersecurity and some robotics demos will provide a glimpse into what the machines of tomorrow will look like. The booming “New Space” economy and space exploration will also be on the agenda, along with a program dedicated to the impact of digital on art, music, and culture in general.

We’re delighted to present Grow your own Cloud, an organization reimagining data storage with nature as key and leveraging research backed by the UN and the World Economic Forum; CAPS, an autonomous flying capsule for reinvented urban mobility; SPOT, an agile robot that navigates terrain with unprecedented mobility; and Video Window, the latest tinted-glass technology capable of adjusting transparency and displaying content on low-power screens through solar energy.

4- Scaling up, to accelerate the emergence of European tech champions

VivaTech proudly presents the Scale-Up Europe initiative, launched by French President Emmanuel Macron, which brings together more than 150 scaleup founders, investors, researchers, business leaders and institutions and aims to accelerate the emergence of European technology champions. A summary of their recommendations will be presented to the French President at VivaTech so they can be taken up to the European level, particularly in the context of the French presidency of the EU in 2022.

Also, VivaTech is releasing Top 100 Scaleups 2021, a list of 100 European scaleups selected for their potential as future unicorns, in partnership with five major international funds investing in Europe – Accel, Balderton, Idinvest, Northzone and Partech – along with technology advisory and investment firm GP Bullhound. This list will be used to select the finalists for the VivaTech Next Unicorn Awards ceremony taking place 18 June.

5- Future of Work and digital transformation for economic recovery

In light of the major upheavals over the past year, the Future of Work is a burning topic that will be considered from all angles at VivaTech. We'll look at the impact of teleworking on individual organizations but also more broadly on corporate culture. We'll examine the lasting changes to how we work, and to how companies have had to adapt and innovate in terms of managing their workforce. And we'll look at the imaginative ways in which the digital and startup space is coping with and adapting to the effects of the health crisis and pivoting to new business models.

We'll also share the latest innovations we've spotted, such as La vitre, an immersive video portal which acts as an extension of the physical world for teleconferencing; Sense Glove, a Dutch startup that offers VR gloves with haptic feedback to make the virtual seem more real; Reachy, a 3D-printed, open-source, remotely controllable robot which is capable of image and voice recognition and which can manipulate objects with precision; and Didimo, which allows 3D human faces to be modeled from a single selfie in 90 seconds.

The platform is now open for press accreditation on 16, 17, 18 and 19 June 2021!
Follow this link to apply: https://subscribe.vivatechnology.com/media

In just four years, VivaTech has become the biggest startup and tech event in Europe and is recognized worldwide as a powerful catalyst for business transformation, startup growth and innovation for the common good. Every year, VivaTech brings together in Paris the world's top business leaders, startups, investors, researchers and thinkers for a unique experience combining inspiration, networking and a showcase for innovation. Starting in 2021, VivaTech will be enriched with a digital platform that will bring together an even larger community of innovators. In 2019, VivaTech has already reached 231 million people worldwide, and has brought together 124,000 visitors on-site, among them more than 13,000 startups, 3,000 venture capitalists and 2,500 journalists from 124 countries. The 5th edition of VivaTech will be held from 16 to 19 June 2021.