VivaTech, Europe's number one startup and tech event, makes its big comeback with more than 91,000 participants in Paris 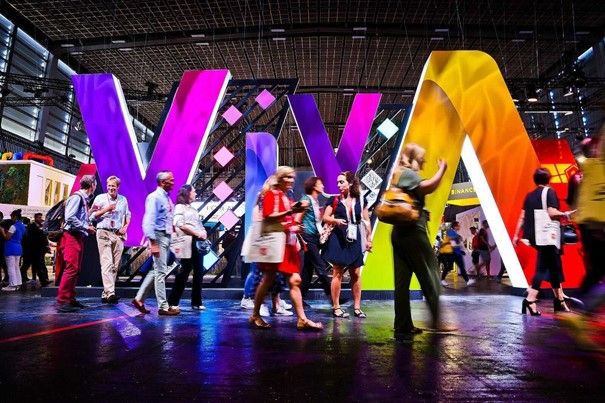 ● 400 million people reached by the event on social networks

Paris, 19 June 2022 – For its big comeback, VivaTech exceeded all the objectives set for the 2022 edition.  A total of 91,000 in-person visitors were able to discover all the innovations and attend the live conferences at the Porte de Versailles expo venue in Paris. The digital audience amounted to 300,000 visits and the VivaTech News channel to more than 4.3 million. The event reached 400 million people and had more than 3 billion views on social networks. The international dimension of VivaTech has been strengthened with 30 countries present and 146 nationalities represented.

India was the first Country of the Year at VivaTech, showcasing the dynamism of its digital ecosystem on the occasion of the 75th anniversary of its independence. The event was attended by Ashwini Vaishnaw, India's Minister of Technology, and Jawed Ashraf, India's ambassador to France. VivaTech also organized the first edition of the AfricaTech Awards in collaboration with Maktar Diop, Managing Director of the International Finance Corporation (IFC).

The VivaTech audience was filled with emotion as President Volodymyr Zelensky called on the tech and startup industries to support Ukraine. The call was broadcast in the form of a hologram in seven European countries with the participation of Gayle King, Amanda Holden, Peter Gabriel and Bernard-Henri Lévy.

MORE THAN EVER THE ESSENTIAL RENDEZ-VOUS FOR BUSINESS

This edition of Viva Technology has once again given the technology sector privileged access to international customers, major investors and new markets. More than 2,000 exhibitors – which included 1,800 startups, 45% of them international, and 700 investment funds – met during three days dedicated to professionals. More than 161,000 business connections were made, 71% of which were international interactions on the digital platform. According to the startups present, more than 25% of their annual business leads were made during these three days.

In addition, the most promising European startups were rewarded at the fourth edition of the Next Unicorn Awards and the 100% digital neo-insurance startup Luko (France) received the grand prize for the highest potential scaleup in Europe.

Nearly 100 challenges were organized to bring together startups and large groups. This year’s LVMH Innovation Award prize was won by Toshi, which provides sustainable, highly personalized and innovative solutions to brands to best meet their customers' omnichannel needs.

VivaTech gave visitors the opportunity to discover more than 300 innovations, including 50 that were exclusive to VivaTech, covering all the groundbreaking fields of tech – GreenTech, digital for mobility, the Future of Work, Web3 and the  Metaverse….

This year, VivaTech promoted a number of initiatives to encourage diversity, particularly for women and young people. These included a specific #WoGiTech programme for the feminization of Tech professions; guided tours for 8th- and 10th-graders; and the "Because Girls Can" day on Saturday, which brought together more than 3,000 girls with a treasure hunt and an inspirational "Girls Hackademy" session.

For the fourth consecutive year, Viva Technology organized its Female Founder Challenge  (FFC). Vanessa Counaert, co-founder of Resortecs, was rewarded for the quality of her project to produce heat-soluble sewing threads that facilitate textile recycling.

The General Public Day allowed thousands of students and candidates to meet companies and find out about tomorrow's jobs in the field of tech, innovation and startups.

"VivaTech is back with an in-person edition that exceeded all our expectations. The tech and digital world was there and made these four days a success. An uncommon effervescence, an incredible energy and above all a collective will to innovate in a responsible and inclusive way were the key ingredients of this year's event, reflecting the dynamism that drives the startup ecosystem. Two themes stood out this year: Web3 and decarbonisation, making VivaTech a space for hard-hitting debate on the practical use of new technologies," said co-presidents Maurice Lévy and Pierre Louette alongside Julie Ranty, Viva Technology's Managing Director.

"We would like to warmly thank Julie Ranty for everything she has contributed to VivaTech since its inception. Her leadership and energy have been major assets in the success of VivaTech. Her choice to embark on an entrepreneurial project is a very logical continuation of her career and we wish her all the best for the future. We are pleased to welcome François Bitouzet, who has already participated in this 2022 edition. His career in the service of the biggest French and international brands and his experience of events will enable VivaTech to confidently embark on the new phase of its development and further increase its global influence," said Maurice Lévy and Pierre Louette, co-presidents of Viva Technology.

THE FULL COMMITMENT OF VIVATECH'S PARTNERS

Viva Technology shares the success of this sixth edition with its major partners and would like to thank them for their commitment:

India, first Country of the Year at VivaTech

About About Viva Technology

Viva Technology is Europe's number one startup and tech event, recognized worldwide as a powerful catalyst for business transformation, startup growth and innovation for the common good. Since 2016, VivaTech has brought together the world's leading business leaders, startups, investors, researchers and thinkers in Paris for a unique experience combining inspiration, networking and a showcase of innovation. Starting with the 2021 edition, VivaTech has been enhanced with a digital platform that connects a global community of innovators. The 6th edition of VivaTech took place 15-18 June 2022. More information available at https://vivatechnology.com/media and @VivaTech.