Tomorrow's biggest stories in tech and business begin in Paris at VivaTech. To give you an
idea of what's in store for our upcoming fifth edition, here are some highlights.

Viva Technology: Bigger and better than ever, with more than 124,000 people attending from around the world! 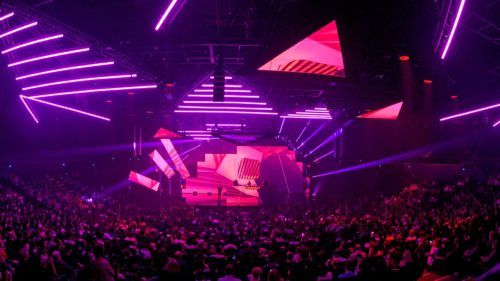 A 24% attendance increase over last year, comprising 125 nationalities, more than 450 speakers, and more than 13,000 startups

With even more innovations, prestigious international partners and inspiring speakers for its fourth edition, Viva Technology has exceeded all expectations and confirmed its standing as an unmissable stop on the international tech calendar.

Paris, 19 May 2019 – UNPRECEDENTED PARTICIPATION FROM TOP SPEAKERS AND GAME-CHANGERS FROM AROUND THE WORLD
Viva Technology was honoured to be inaugurated by French president Emmanuel Macron, who on the evening prior to the opening day had welcomed French and international technology leaders at the “Tech for Good” summit. Canada’s Prime Minister Justin Trudeau, Rwanda’s President Paul Kagame and Senegal’s President Macky Sall also graced VivaTech with their presence and their participation.

Discussions focussed on major trends shaping the world of tomorrow, delving into artificial Intelligence, 5G, blockchain, quantum computing, connected healthcare, the new space race, mobility, the environment…. Among the main thematic pillars of this fourth edition of VivaTech:
- Tech for Good: Examining how to make technology work for the common good and have a positive PRESS RELEASE impact, with a reenactment on the opening day of VivaTech of the commitments from the Tech for Good Summit the previous evening at the Élysée Palace
- United Tech of Europe: Building an ecosystem to rival the American and Asian tech juggernauts and helping European startups to achieve the scale of giants
- Women in Tech: Remedying the persistent underrepresentation of women in tech and startups?
- Jobs: Supporting entrepreneurs in overcoming one of their main challenges, hiring the right talent
- AfricaTech: Exploring the tech opportunities for the African continent

EXCEPTIONAL VISIBILITY ON SOCIAL MEDIA
VivaTech’s footprint extended far beyond the Porte de Versailles in Paris, reaching a total of 231 million people from 16th to 18th May 2019 (+100% over last year!) in more than 130 countries. Content created by VivaTech on the Internet received more than 3 billion unique views in only three days! A record for this type of event.

EVEN MORE BUSINESS OPPORTUNITIES
With more than 13,000 startups at VivaTech and some 2,300 showcased or pitching, even more innovative young companies were drawn to VivaTech this year. There was a visible increase in the quality of the startups present in the Labs, country pavilions and corners, and a heightened presence of more mature startups.

Three-thousand-three-hundred VCs came to VivaTech in 2019, a dramatic increase over 2018 (+50%), among them the world’s most active venture funds (Accel, Balderton, Softbank Vision Fund, Atomico, Partech, Felix Capital, etc.) with qualitative programs. Of particular note was the success of the Female Founder Challenge and Office Hours devoted entirely to female founders of startups, as part of the Women in Tech initiative.
Also present were founders or CEOs of some of the world’s biggest accelerators, among them: Said Amidi (Plug and Play), Carine Magescas (Angelpad), Patrick Dezeuw (StartupBootcamp), Siobhan Dullea (MassChallenge), and Jenny Fieldings (Techstars), Bedy Yang (500 Startups).

Lastly, the first edition of the Next European Unicorn Awards, in partnership with Accel, Les Echos and the Wall Street Journal, allowed us to showcase Europe’s enormous potential for scaleups. Thirty scaleups all based in Europe were finalists. The winners: Payfit (BtoB SMB), Snyk (BtoB Enterprize), Vinted (BtoC), Algolia (Deep Tech), Olio, and Openclassroom (ex aequo Tech 4 Good). The Grand Prize was won by Openclassroom for traction potential, impact and leadership.

EXCEPTIONAL INNOVATIONS REVEALED, SOME OF THEM FOR THE FIRST TIME ANYWHERE
Visitors to the Hall of Tech could discover the latest innovations transforming their sectors and making an impact on their daily lives, brought by major tech players and hundreds of game-changing startups. Flying taxis, scooters, electric scooters: New mobility was very much in evidence, with innovations from Renault, Volkswagen, Valeo, Bosch, HPE, Jaguar, the new Citroën concept car, and in the Mobility Park sponsored by Engie: Aeromobil, HoverTaxi, Ascendance Flight Technologies, Hyperpoland and Twiice. Some highlights: the Anymal, Antbot (CNRS), Da Vinci robots in the Robot Park sponsored by EDF; the Delair image-and-data recognition drone in the AI Innovation Park sponsored by Intel; immersive and spectacular Virtual Reality experiences such as the PSG VR Arcade with mk2 or Black Eclipse in the XR Park sponsorised by Oracle; and innovations to help preserve the environment with Etree, Omniflow and Hexagro in the GreenTech Park.

A FEW OF THE UNMISSABLE HAPPENINGS AT VIVA TECHNOLOGY:
The Female Founder Challenge organized in partnership with with 50inTech: Two hours of meetings between female startuppers and VCs and a pitch contest for the biggest VCs. The winner is Vivian Nwakah, MedSaf.
The third annual LVMH Innovation Award was awarded to 3DLOOK. The prize was awarded by Bernard Arnault and Ian Rogers.
The EU Prize for Women Innovators, in the presence of Carlos Moedas, European Commissioner for Research, Science and Innovation, was awarded to Michela Puddu, Martine Caroff, Irina Borodina et Shimrit Perkol-Finkel
The FAMAE “Precious Water” Grand Prize from the FAMAE Foundation and the launch of the Make.Org “Give Every Young Person A Chance”initiative on Saturday
The Talent Center by ManpowerGroup, where job-seekers and recruiters could meet up. With more than 2,000 job offers, this was the place where coaching, training and meetings boosted career prospects for étudiants
The first edition of the Next Startupper Challenge, which rewarded the Neolithe project at the École Polytechnique and Ok Alfred at École 42, and whose prizes were awarded by Frédérique Vidal, France’s Minister of Higher Education, Research and Innovation.
The biggest Hackathon in Europe, organized once again by TechCrunch with the support of EDHEC, Eramet, Sanofi–Cegedim–IBM, Galeries Lafayette, Publicis Sapient and Corvid by Wix, rewarded the startup Myneral.me
The CMO Forum bringing together the greatest leaders in marketing, communication and media throughout the day on May 17, a series of debates held in partnership with McKinsey and Nielsen
The largest hackathon in Europe, once again organized with TechCrunch with the support of EDHEC, Eramet, Sanofi-Cegedim-IBM, Galeries Lafayette, Publicis Sapient and Corvid by Wix, awarded the startup Myneral.me.
The Women in Tech Conference brought together female “Role models” – entrepreneurs, actors, YouTubers – to discuss the place of women in tech and elsewhere in society, along with some comic relief from Bérengère Krief.
The Tribunal pour les Générations Futures (Court for Future Generations), organized by quarterly French magazine Usbek & Rica, hosed a debate on the theme “Has the Internet Killed Democracy?” in a format that mixed content, entertainment and a public vote
Sogeti Esport Series, a major E-sport event with two competitions: Rocket League (RL) and Super Smash Bros Ultimate (SSBU)
Viva Live with The Avener, a major concert presented by EDF and VivaTech in partnership with Le Parisien

MARK YOUR CALENDARS FOR 2020!
VivaTech will once again gather innovators from around the world for three days in 2020, for an even more ambitious fifth edition. “This fourth edition is one for the record books! Growing even bigger was a challenge but it paid off and represents a decisive step in VivaTech’s development. Bringing together even more startups, top speakers and visitors from around the world, VivaTech has emerged as the leading European beacon for the global tech scene. The energy and enthusiasm that was perceived by participants and visitors also makes it a unique event. I would like to extend my heartfelt thanks to all those who have given us their support these past four years: sponsors, partners, exhibitors, investors, media, startups, and of course the visitors – professionals as well as the general public. I would also like to commend the exceptional work by the devoted teams under Julie Ranty and Maxime Baffert, co-General Directors of VivaTech.”

– Maurice Lévy,
Chairman of the Supervisory Board of Publicis Groupe and co-founder of VivaTech with Groupe Les Echos - Le Parisien

“VivaTech’s success provides concrete proof that France is capable of creating a sustainable international event, one that attracts the biggest names in tech who are creating tomorrow’s world. Thanks to partners from 95 different countries who have lent their support this year, we can say that VivaTech has brought the whole world to Paris. My thanks go to all the teams. The collaboration between the Publicis and Les EchosLe Parisien groups is a real strength. Once again, our media editors mobilized to cover the event: Les Échos, Les Échos Start, Le Parisien, The Innovator, Capital Finance, and Radio Classique.”

About Viva Technology – Co-organized by Publicis Groupe and Groupe Les Echos, VivaTech is the world’s rendezvous for startups and leaders to celebrate innovation. This international event is dedicated to the growth of startups, digital transformation and innovation. More than 124,000 visitors attended the fourth edition, an increase of more than 24% in one year. Viva Technology 2020 will build on this success and will bring together startups, business leaders and executives, investors, academics, students and media from around the globe.
​
Further information available at www.vivatechnology.com and @VivaTech VivaTech
Press Kit: https://presskit-2019.vivatechnology.com/