Living in the Dawn of a Golden Era of Space Exploration

There is a lot of traffic around Mars these days. The United States, China, the European Space Agency (ESA), India and the United Arab Emirates all currently have probes orbiting the red planet. And while the United States is currently the only one with rovers operating on the surface (and, as of last week, the first interplanetary helicopter, Ingenuity), China plans to land its own vehicle sometime next month.

The multiple missions are part of a new golden era of space exploration. Unlike the first one, which captured the imagination of a generation in the 1950s, 1960s and 1970s, and played out against the backdrop of the Cold War competition between the United State and the Soviet Union, the current space race is not confined to national space agencies with deep pockets. 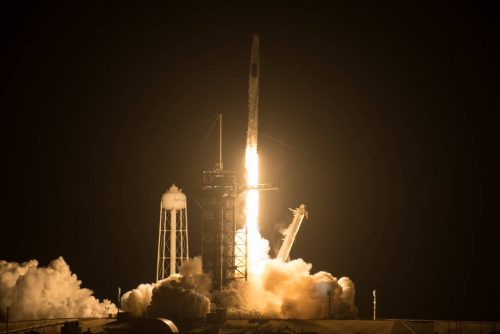 Indeed, much of the activity, at least in near- and low-earth orbit, is now being driven by commercial and private enterprises like SpaceX, the company started by Elon Musk. Experts agree that it is the involvement of these new players, which are finding new, cost-efficient ways to use technology, that is behind the renaissance in space exploration and that is rapidly turning what a few years ago was science fiction into science possible and science fact.

Dr. Robert Zubrin, president of Pioneer Astronautics, an aerospace research and development company in Colorado, who is also the founder of the Mars Society, an organization dedicated to promoting the exploration and settlement of Mars, explained that private companies have been extremely efficient in developing their programs. 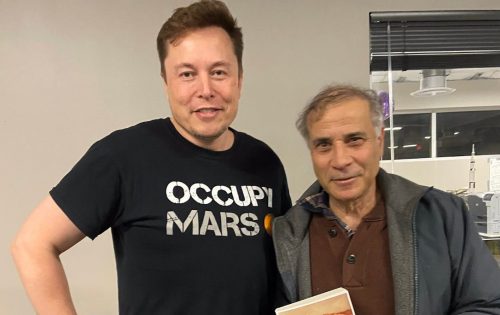 Referring to Mr. Musk, Mr. Zubrin said, "What he has shown is that it is possible with a well-led entrepreneurial team to do things in space that was previously thought required the efforts of major powers and to do them in a third of the time, at a tenth the cost, and even do things they had deemed impossible, such as reusable launch vehicles that come back and land at the landing site."

The result has been to sharply reduce the cost of space flight. As an example, Mr. Zubrin cited the cost of taking a kilogram of payload into space. The cost was astronomical when Sputnik blasted off in 1957. It declined to about $10,000 per kilogram by 1970, but it remained fixed there until 2010. Since then it has fallen to $2,000.

The falling cost has made space exploration much more affordable, even for countries that have not historically been associated with such endeavors, including South Africa and Nigeria, which has launched three satellites. What is making space more affordable is that space agencies and companies no longer have to develop their own one-of-a-kind technology, which is prohibitively expensive.

Dr. Tanya Harrison, a scientist and manager at Planet Labs, an earth imaging company based in San Francisco, who worked at NASA, the United States space agency, on three rover missions -- Opportunity, Curiosity and Perseverance – explained that technology is no longer a barrier to space travel.

"Instead of having to build these expensive, exquisite pieces of technology that can never fail, the space industry is using more commercial, off-the-shelf parts that are not necessarily designed for a single mission or specifically designed to work in space," said Dr. Harrison. "Through that, they are able to get all the components cheaper."

Public-private partnerships are also flourishing. Earlier this month, NASA, which is already relying on SpaceX to ferry its astronauts to the International Space Station, announced that when the United States returns to the moon later this decade, it will use SpaceX’s new Starship spaceship to take its astronauts from lunar orbit to the moon’s surface. The value of the contract is $2,9 billion.

ESA has a program called Downstream Gateway, which it started in 2019, to create partnerships between itself and private enterprise. Its next online workshop is later this week on "Space for Finance: How Space Technology Can Support Digitalisation and Greening of the Financial Sector."

There are already several prominent private enterprises building space vehicles or launching satellites other than SpaceX. They include Blue Origin, which is owned by Jeff Bezos, the founder of Amazon, and which has already managed to take some payloads into suborbital space, and Virgin Galactic, which was started by Richard Branson, the founder of Virgin Group. There is also Rocket Lab, an American company with a New Zealand subsidiary that has been successfully putting commercial satellites into earth orbit for about a decade.

While it clearly captures the imagination, space exploration also has pragmatic benefits for everyone back on earth.

Dr. Harrison mentioned that the most direct was in near-earth orbit, pointing out that satellites provide communications for cell phones, GPS positioning for air, ground and sea transportation, and are essential in tracking and analyzing what is happening to the environment. Satellites also monitor human activities, allowing the world to see human-rights problems and abuses, such as Uyghur internment camps in China, the United States-Mexico border, and the Rohingya crisis in Myanmar.

"You are constantly interacting with GPS satellites, even if you are not using it for navigation," Dr. Harrison said. "It is used in ATMs for giving you time stamps on your banking receipts. Utility companies even use it for certain timing issues. It is much more widespread than people realize."

The benefits to deep space missions are harder to quantify, she admitted, but pointed to inspiration as one of them. 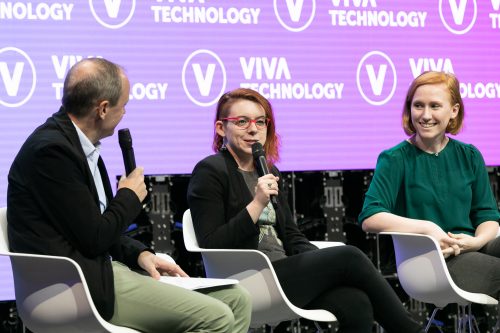 Dr. Zubrin agrees, but believes that there are, in fact, also pragmatic reasons for missions beyond our planet, reasons that he has laid out in his most recent book, The Case for Space. Perhaps the most important one is survival.

“By survival, I am talking about being able to deflect asteroids," he explained. "The earth is in space and everything in space is moving around and periodically crashing into each other. The earth is always crashing into stuff and these have caused mass extinctions. We have to control this flight traffic. If you know about an asteroid on a collision course with earth far enough out, you can deflect it with the smallest nudge."

Space exploration is also essential to combat what he calls a plague of bad ideas that have brought death and ruin time and again. The bad ideas revolve around the concept that there are not enough resources for everyone, so people think they need to fight each other for what there is available.

He explained how space travel can help. "If, by working together, we can open up new planets, there is no need to fight over provinces. The issue is not that we are going to get oil from Mars, the issue is that resources are defined by human creativity and by exercising this together, we can enormously enhance the resources and prospects and opportunities of the human species."

Indeed, one of the core missions and raisons d’être of ESA is that it promotes international cooperation and understanding. Among the agency’s priorities for 2025 are improving relations and integration in the European Union through trans-European space cooperation; helping companies and startups adapt green technology, environmental solutions and digitalization by using the resources of ESA; and promoting safety and security by providing vital information, such as weather forecasts and reliable communications systems.

Of course, there are challenges to space exploration, particularly over long distances. People need food, water and fuel to travel long distances, though water seems to no longer be a problem as orbiters traveling to other planets and moons in the solar system have found it everywhere, even on the dark side of Mercury, which is covered in ice.

There are also the physiological challenges of space flight. Spending long periods in low- or no-gravity environments affects muscle and bone strength and density. A mission to Mars, for example, would take about six months of travel time, followed by having to stay on the planet for about 18 months to wait for it to approach the earth at a close enough distance to make the six month voyage home. Altogether, that is at least two-and-a-half years away from the gravity of earth.

Dr. Zubrin does not think that will be a problem, saying that spaceships can be designed to rotate to reproduce the one-G environment of earth and so, too, can an installation on Mars. "I think we will have people on Mars by 2030," he said. "I think that Starship will probably reach orbit by next year. Musk is saying this year, I’ll take that with a certain amount of salt and say next year. But he’s going to do it."

There are a lot of other current or future projects beyond Mars and a return to the moon, on both the public and private fronts.

- NASA and ESA are planning to send a spacecraft crashing into a binary asteroid called Didymos and Didmoon that will pass close to earth next year. The idea of the mission, which is called Double Asteroid Redirection Test (DART), is to see if the trajectory of the asteroid can be changed, as a dress rehearsal for deflecting a bigger object should it approach the earth, just as Dr. Zubrin said may one day be necessary;

- NASA has an orbiter around Jupiter and is working on a mission to Europa, one of the giant planets moons, for later this decade to explore the oceans on its surface, oceans that are covered in ice ;

- In addition to returning astronauts to the moon, NASA also has a multinational plan to build a Lunar Outpost, which would actually be between the earth and the moon and would be a place for running space experiments ;

- Japan has a mission that is in orbit around Venus ;

- India will make a second attempt to land a rover on the moon after a first mission in 2019 failed;

- At least two companies that have plans to build private space stations ;

- Among the more fanciful ideas, earlier this year, a company called Orbital Assembly Corporation announced that it plans to build a space hotel to open later this decade. The group has already raised more than $1 million. 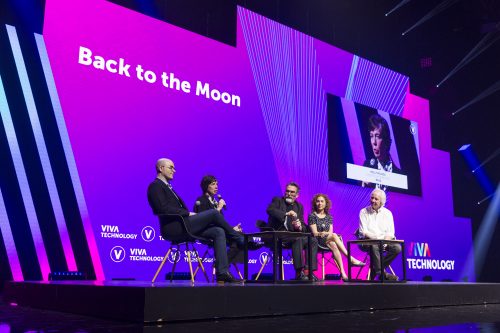 Holly Ridings, Chief Flight Director at NASA, during the Back to the Moon session at VivaTech 2019. Full talk here.

In about 300 years, Dr. Zubrin believes that humans will have traveled to and even be living in other nearby star systems, each developing its own distinctive society. "There will be thousands of new nations, new cultures, new literatures, new languages, new traditions, contributions to technology and invention, and a vastly richer human experience. And that is truly something grand and wonderful," he said.

How is space exploration going to strive towards these goals ? According to Dr. Harrison, "I think that it is going to become more and more of a (public-private) partnership."